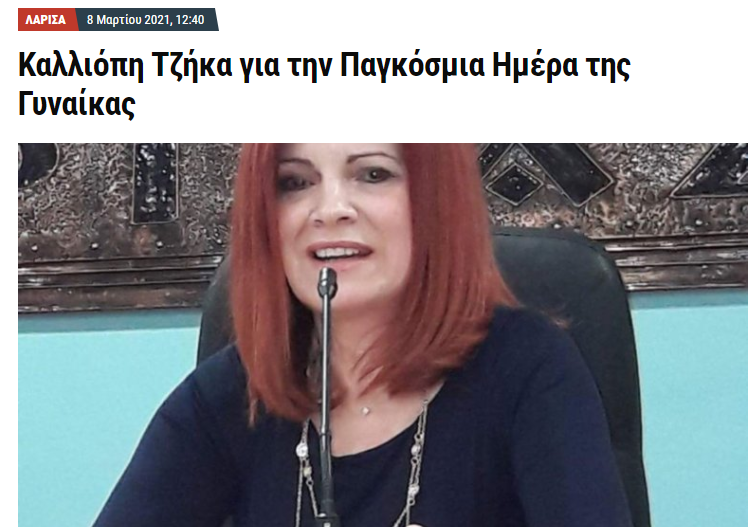 On the occasion of International Women’s Day on 8 March, the Larissa news site Pineiosnews.gr published an article by EEDEGE First Vice- President Kalliopi Tzika on women in the workplace.

Read the article (in Greek)

Ms Kalliopi Tzika, general secretary of the Larissa Chamber of Commerce and first vice-president of EEDEGE, announces the following on the occasion of International Women’s Day:

“This year’s celebration of International Women’s Day is different. It is more celebratory, the silence has been broken, and we owe it to a brave woman, an Olympic Games winner.

This unique opportunity presented itself for us to take the big step towards solving problems which until yesterday seemed unsolvable. We must all finally understand that equality is not just a women’s issue, but that of the whole of society.

Women must be on the first line after the pandemic as well, at the centre of a national plan for economic regeneration and society’s progress.

In our country, women this year are also fighting another big battle which all together we must win with the sole aim of having our voices finally heard clearly and loudly.

The growth of the Greek #metoo movement is a large opportunity for the women of our country to do away with stereotypes decades-old and to bring to justice cases which up to recently were left in the shadows due to fear and social prejudices.

Additionally, mobbing is an issue for all of us, and of course the state as well, which has a constitutional obligation to protect our basic rights, such as the freedom to develop our personality.

We can no longer pretend that psychological or moral harassment at work is an isolated occurrence between two parties.

It is very important that women work. Employment arms them with autonomy, independence, faith in their abilities, the strength to meet the challenges that limit them, that keep them far from realising their goals and dreams.

Women’s issues don’t usually monopolise our daily lives; they are usually very low on our priority list, but it has been proven that these are inextricably linked to all the different aspects of social, professional, and family life.

On the occasion of International Women’s Day, on 8 March, let us reflect on why gifted women of many talents and armed with knowledge, often more than men, continue to have the highest unemployment rates?

‘Women talk a lot, that’s why they shouldn’t be on the Boards of Directors,’ said the head of the Tokyo Olympic Games, who was opposed to resigning from his duties; but eventually was forced to, due to the circumstances, to do so.

But wouldn’t it perhaps be business brilliance to boost the number of women on the Boards of Directors and in key positions in businesses? There are a lot of authoritative studies – such as by Goldman Sachs and McKinsey & Co - which prove it - that women have a better sense and foresight of danger, that they evaluate and make better use of a company’s human resources, that they are more knowledgeable of society’s consumer habits, and have comprehensive and firm management skills, especially during times of crisis.

There are countless women who not only shine in the corporate arena, but also innovate, by, for instance, taking a useless recyclable material and making it essential. Much like Nzami Matie of Kenya, who found a way to turn plastic into brick, five to seven times more resilient than cement, as she got tired of waiting, she says, for the government to take an interest in environmental pollution.

But, what happens with small and medium-sized female entrepreneurship during the Covid-19 pandemic? Women’s businesses are the ones most tasked with many more obligations during lockdown, with closed schools forcing them to replace teachers in their homes, with closed creative play centres for children as well as accommodation centres for the elderly.

A society of ‘equal opportunities’ wouldn’t allow this. It is self-evident that the state has to support women’s entrepreneurship with financing tools, with the cancelation of debts and not just a suspension in payments, to ensure a continuation of entrepreneurship and a recovery - so that women continue to be entrepreneurs.

We live in a country that, in particular, needs such successful initiatives and practices, for competitiveness and growth. We will continue in the same dynamic fashion, because we believe that this difficult hour is the time when women must be given the appropriate incentives, so that they can act to the extent possible. The benefits from supporting them will be reaped by the whole of society as well as by the economy.

Sooner or later, the pandemic will pass, and humanity will have learned to continue on its course. As in every crisis, so today, we are bound to look ahead and to find solutions. These solutions should not be bereft of substantial actions to support women’s work. The Equality Committees of Prefectures and Municipalities, established to operate in the Thessaly Prefecture, the Larissa Municipality, and throughout Greece, produce important work and are an important step in promoting women’s right on all levels, without exceptions.

When we win the battle for equality and women stop being underestimated, abused, and discredited, only then will we fill with hope for a better tomorrow.

When we stop talking of demeaning, but necessary incentives, such as quotas, and it becomes innate in all of us, men and women, that strength, success, smart negotiating skills and management, intelligence and hard work are genderless, only then will we be able to say that we have succeeded as women, as human beings.

‘Women are capable of anything,’ believed Dostoevsky. This means that women’s mental strength is much deeper than men’s.

The Woman we are honouring today and which we should be honouring every day, every moment, on her way to success, on the path to the top, always stops reverently and bends with affection on her toil to hear the ceaseless beating of her heart in order to go on.

Let’s listen to this beating heart. She deserves it; our society deserves it.”