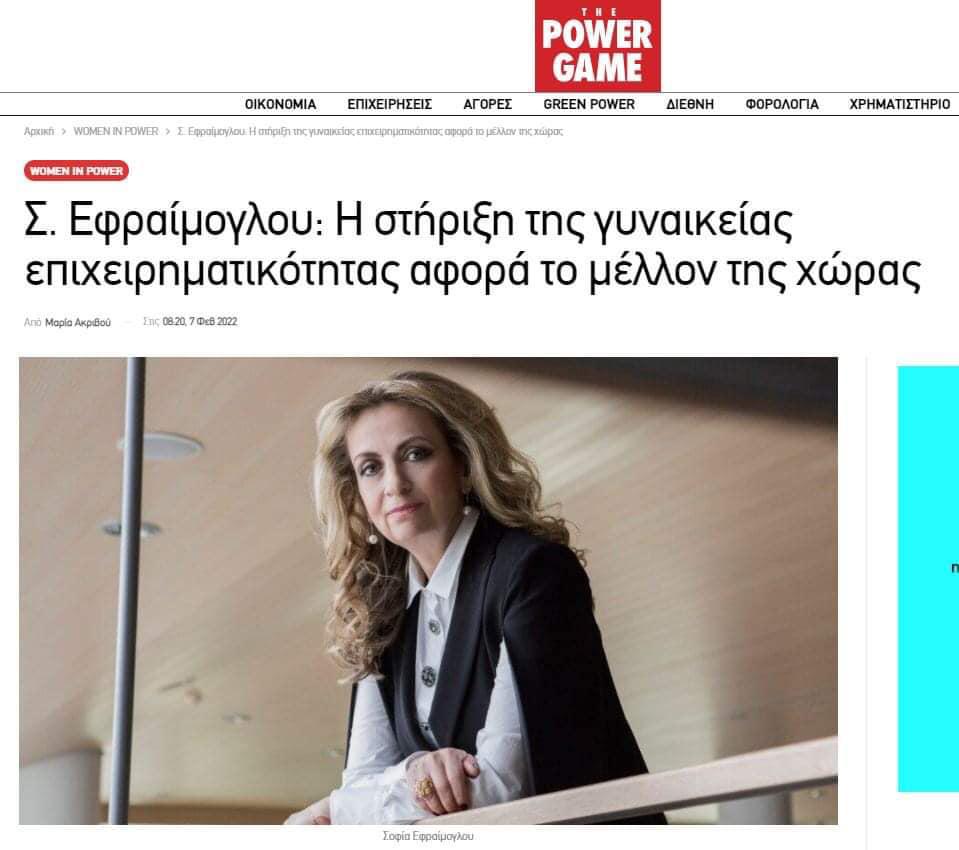 EEEDEGE President Sofia Kounenaki Efraimoglou had the honour of inaugurating the new column of e-magazine The Power Game (powergame.gr), called Women in Power, granting an interview to journalist Maria Akrivou.

Among other things, in her interview, the EEDEGE president referred to the support provided to women's entrepreneurship and, in particular, to boosting women's start-ups through the The Athens Startup Business Incubator. which is a new important initiative of the Athens Chamber of Commerce and Industry (ACCI) and EEDEGE.

Read the interview here (in Greek)

Read the interview in English:

In 2021, our country was last in gender equality in Europe, and this chasm between men and women in the labour market is still large both in terms of pay - as for the same position women receive 30% less money than men - as well as in terms of equal opportunities for professional development, and unfortunately whatever progress had been achieved in the last years was scaled back due to the pandemic which made lots of women abandon their jobs to dedicate themselves to roles that involve their families.

Sopha Efraimoglou, EEDEGE president, vice president of the Foundation for the Hellenic World, as well as head of the state-of-the-art an innovative Cultural Centre “Hellenic Cosmos” and first vice-president of the Athens Chamber of Commerce and Industry (ACCI) has made a personal wager to boost women's entrepreneurship and boost women's adjustment to the new digital environment as fast and as effectively as possible - an environment that generates important opportunities – she notes in her interview with powergame.gr

She outlines the work environment in Greece, analyses the way that female executives can scale up, speaks of her initiative which will run in parallel with the Ministry of Labour and Social Affairs regarding training 5,300 unemployed women from the whole of Greece, who will have the opportunity to intern or do their practical training in businesses, and through EEDEGE and ACCI, female start-ups from the whole of Greece can apply to be hosted in the new Athens Start-Up Business Incubator.

It’s a fact that women in the job market do not begin at the same starting line and do not enjoy the same opportunities as their male colleagues do; In fact, during the pandemic, where multitasking became even more demanding. many women withdrew from the market. How can they scale up under these circumstances, what kind of measures are needed by the state and by the business world?

You bring up a very crucial matter. Because it is true that the pandemic came and on the one hand stunted any progress that had started being made towards bridging the gender pay gap and on the other hand it intensified nearly all the problems related to inequality that women face in the labour and professional market. According to a report by the World Economic Forum, the pandemic will increase the time needed to close the gender gap between the two sexes to 135.6 years from 99 1/2 years.

In our country official data shows that employment rates for women dropped more than men’s during the pandemic.

But you will allow me to tell you speaking as president of EEDEGE as well as first vice-president of the Athens Chamber of Commerce and Industry bracket, the the largest Chamber of Commerce in the country, that I discern daily that women who dare succeed do take the lead and innovate. This doesn't mean that there aren't large obstacles and for this reason EEDEGE and ACCI invite female start-ups from the whole of Greece to apply to the Athens Start-up Business Incubator. It is an initiative that I believe can make the difference, as all those who respond to the invitation will enjoy the valuable services offered by the incubator - such as access to top training in cooporation with the Alba Business School, as well as housing their business in a state-of-the-art facility, where they will have thw needed equipment to open their wings. These businesses, on their part, have a responsibility and a duty to take note of the changes that are taking place regarding the representation of both genders, and to leave the stereotypes of the past behind, and give women the opportunities that they deserve.

Where is Greece today compared to the rest of the developed world in terms of skills and true equality?

According to the Gender Equality Index by the European Institute for Gender Equality. Greece in 2021 unfortunately was in last place in terms of equality. Of course, the data relates to 2019 and from then there have been significant strides made at least in terms of equality of the sexes in the workplace - with a good example of the progress made the measure taken in the last year placing a 25% quota in women's representation on the executive boards of listed companies. as well as the measure on paternity leave. At the same time, many important initiatives are being taken in upscaling and training women. In terms of skills, we see progress being made continuously on a daily rate, with the number of women who share their knowledge increasing, who share their experience and their expertise. Where I think we should focus on is in the digital revolution, facilitating the speediest and most efficient adjustment of women in this new environment.

Studies have shown that women in positions of responsibility take decisions that are better and achieve better results. Despite this, they are eliminated from the talent pool. How can the use of new tech tools contribute to closing the so-called skills gap?

I will give you some information that reflects in the most characteristic way the status quo that exists. Women in Greece have the lowest rate in Europe in terms of their participation in the digital economy and society – as evidenced in the European Commission's Women in Digital scoreboard for 2021, where Greece ranked 23rd out of 28 member states. It is far away from countries which serve as showcases, such as Finland, Sweden, Denmark, and Estonia and is on the same level nearly as Italy Hungary, Poland, and Bulgaria

Research shows that just 18% of women study IT, while 25% eventually work in computing, and 5% is in management. These positions they work in are jobs where they are paid 30% less than their male colleagues. Therefore, you see it's a matter of choices. Whether we’re going to move really quickly and change this situation giving women the opportunity to gain digital skills or on the whole as an economy miss the digital revolution train.

As EEDEGE president you proposed to the Labour Ministry an initiative that involves training 5,300 unemployed women from around Greece, giving them the opportunity to do their practical training in businesses. Which phase is its roll-out in and what are the benefits that will come about through this very important programme?

Let me start by saying that within January our goal is to have completed all the procedures so that the programme can run within 2022 and 2023. I would like to note that training women from the whole of Greece in digital skills as well as in entrepreneurial skills are factors that as we said are crucial to boosting women's entrepreneurship, but also in bridging the gender pay gap as well. Unemployed women who will participate in the programme have only to gain. They will gain not just in skills, which undoubtedly will be useful as tools they need to find work with, but the programme will also bring them into contact with the labour market, as they will also be able to do their practical training at businesses.

What priorities has EEDEGE set for 2022?

Our basic priority, our central operating pillar, at EEDEGE is to further boost women's entrepreneurship. The invitation we extended in cooperation with the Athens Chamber of Commerce and Industry towards female start-ups to take part in the Athens Start-Up Business Incubator and the programme of upskilling unemployed women is just the beginning. As EEDEGE, we will proceed with implementing several initiatives as part of a comprehensive strategy. Initiatives we will be able to talk about further on. Our ultimate goal is to boost women's position in the labour market and their familiarisation with the available digital tools, to upskill them. At the same time, we will stand next to every female entrepreneur and will lobby the state strongly in the context of our institutional role to adopt important measures regarding women entrepreneurs and freelancers.

President of EEDEGE, vice president of the Foundation of the Hellenic World and head of the state-of-the-art and innovative Cultural Center "Hellenic Cosmos", you recently assumed the duties of first vice-president of the Athens Chamber of Commerce and Industry. How does Sofia Efraimoglou manage to balance between so many roles that require a lot of her personal time and hard work?

Life has taught me that if you don't have passion for what you do sooner or later you will hit a dead end. Promoting Greek culture and supporting female entrepreneurship are for me two matters that I believe impact the future of the country.

Preserving our historical memory intact, as well as Greek tradition, aside from our debt - is also an imperative need in these difficult times. The past must serve as a reference point, while modern thought must be inspired by the Hellenic spirit. I am very proud that we can contribute to the cultural creation and expression of our country through the innovative shows and exhibits that we house and through the pioneering programmes that are being rolled out

at the Hellenic Cosmos. In terms of female entrepreneurship, there is nothing that causes more optimism than seeing women making their dreams come true, especially in today's environment. I say all this to note and emphasise my joy - that comes from being involved in these two fields. The truth is I wish a day had more hours, but it is also true that if you really want something, you can find the time for everything.

What is the biggest challenge today for women CEO in your opinion?

Balance. Women CEOs are called upon to balance their work and personal lives. For a person to be whole and complete, they have to find their own balance. Today, women need to overcome tremendous challenges that they face in business and at the same time they have to find solutions to unparalleled situations that we are living through that are derailing family programming.

What kind of strategy did you follow in the last two years when the pandemic struck the entertainment business? Is there a Plan B in case theatres have to close once more due to an increase in covid cases?

We have invested in research in virtual and extended reality, creating the Centre for Research and Excellence in this field. During this year, we will present important applications not just for culture, but also for health and for business, and we will organise contests and workshops. All of this will be offered for free to the audience so that they can become familiar with the technology.

I don't believe that theatres will close or if they do, they will not close for an extended period of time, and, in any case, we will soon have interesting and innovative activities to present to our audience.