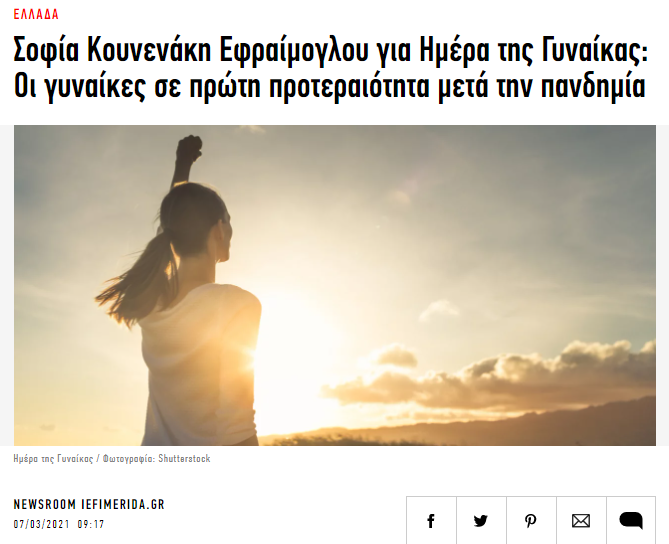 Women a priority after the pandemic

EEDEGE President Sofia Kounenaki Efraimoglou’s article “Women a top priority after the pandemic,” was published by iefemerida on 7 March, on the occasion of International Women’s Day the following day (8 March).

Read the article in Greek

Customarily, the celebration of International Women's Day was an occasion to highlight issues that mainly concern gender equality, but most of the time the state was limited to wishful thinking.

This year, the large crisis stemming from the pandemic is a game changer as women are literally at the forefront. The European Parliament dedicates this year's International Women's Day to the global struggle of women against the Covid-19 crisis, as women make up the majority of people employed in healthcare services and give their all to save millions of lives.

Globally, it is estimated that women make up 70% of the workforce in healthcare and in social care, while they also contribute the most to an extremely important but rather underestimated part of society, that of unpaid work and care. Compared to men, women spend three times more time in unpaid work, while their contribution to unpaid care is estimated at 11 trillion dollars.

The effects of the pandemic are enormous. Studies show that women face more job losses and precarious jobs. According to the International Labour Organization (ILO), the pandemic is significantly impacting at least 510 million women, a number that is 40% of total female employment.

At the same time, gender discrimination is being exacerbated. The consequences of the restrictive measures are such that the benefits of the last 20 years in terms of bridging the pay gap are at risk of being lost. Especially in the healthcare sector, the gender pay gap reaches 28%. Even before the pandemic, the reality – on an international level and not only in Greece – was that a woman and a man with similar qualifications and in the same position were not paid the same.

Research by the EU agency for the Improvement of Living and Working Conditions, Eurofound, shows that the gender gap at work costs Europe more than EUR 320 billion, which corresponds to almost 2.5% of GDP.

We should also not forget that labour inequalities have other consequences as well, both in terms of women's financial security and the quality of life they enjoy.

Unfortunately, the problems faced by women today do not stop at work. The pandemic crisis and successive lockdowns have led to a large increase in domestic violence, an issue that is often taboo, but should be dealt with... yesterday. The United Nations has described the increase in domestic violence as a "shadow pandemic" as it is estimated that incidents increase by 15 million (or 20%) for every 3 months of curfew, with millions of women "trapped" at home.

Let us hope that the head of the European Commission, Ursula von der Leyen, will deliver on the promise she made and propose new legislation to combat violence against women, an initiative that is becoming even more important due to the lockdown.

In Greece, women are fighting another very big battle this year, which we must all win together with one purpose: to make our voices heard clearly and loudly. The growth of the Greek #metoo movement is providing the opportunity for women in our country to break down decades-old stereotypes and bring to justice cases that until recently remained in the shadows due to fear and social prejudices. The extent of the phenomenon is reflected in a recent public opinion survey (Kourtoglou, Xenakis) which showed that 82% of women in Attica say that they have been sexually harassed or suffered violence in their lives at least once - of all kinds (verbal, physical, emotional) in the workforce.

An equally important field – if not the most important one – is equality of access to education. The pandemic here too threatens to reverse the progress of many years. According to the World Bank, just one more year that women spend in education increases their potential salary by 12%, while experts warn that hundreds of millions of girls will not return to school after the pandemic. Based on estimates by MKO Plan International, the closure of schools and universities during the pandemic affected 91% of students worldwide, with 743 million girls now out of school.

For all these reasons, this year's International Women's Day is different. Through the crisis, the problems and the inequalities, there is a unique opportunity to take the big step towards solving problems that until yesterday seemed unsolvable. We must finally understand that equality is not a matter for women, but for society as a whole. Women should also be at the forefront after the pandemic, at the heart of a national plan for the recovery of the economy and the progress of society.