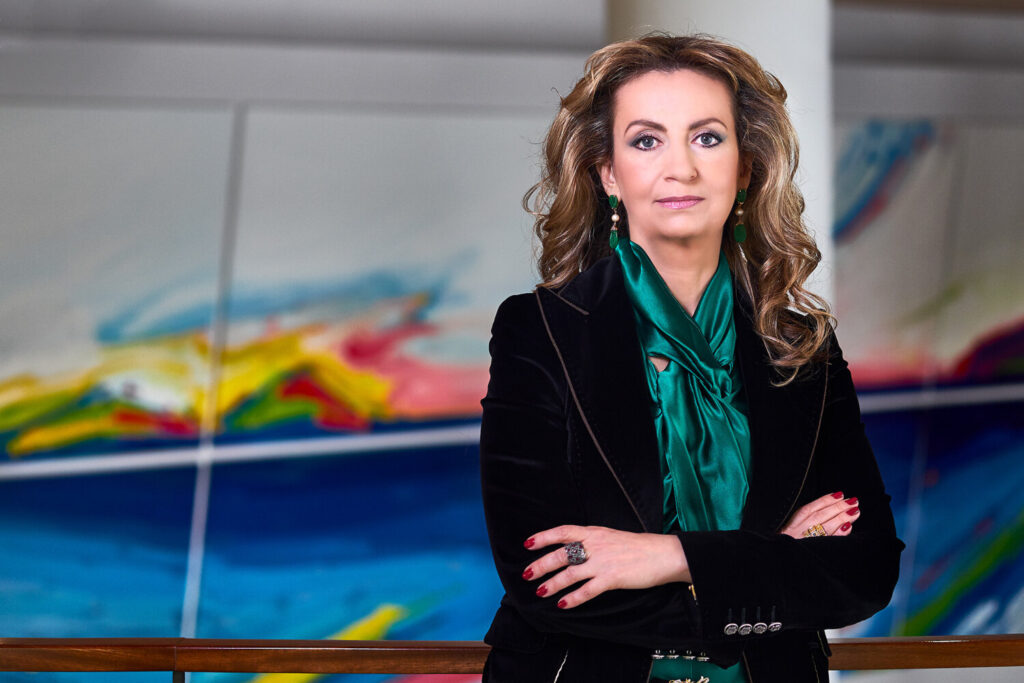 “My vision is the modernisation of the state and boosting Greek society in line with the new reality that is being created through the huge leaps and bounds in digital technology, but always grounded in culture and civilisation.

“I believe that Greece must again help the whole world through its wisdom, grounded in the values and ideals that have brought us here. We must be pioneers in matters relating to the green transition, to the digital transformation, to innovation, but also in fighting any kind of inequality. I believe that it is equally important to showcase women’s entrepreneurship as one of the most important pillars for growth in our country.”

Read the feature here (in Greek)

Sofia Efraimoglou: “We have a duty to give women incentives to become entrepreneurs as well as to return to the labour market”

My relationship with chambers of commerce began many years ago when I realised how important it is to be able to institutionally boost entrepreneurship overall. I was supported in this direction by two very special people in my life. My father, Konstantinos Kounenakis, and Lazaros Efraimoglou, who had even served as president of the Athens Chamber of Commerce and Industry, as president of the Central Union of Chambers and as vice President of the EUROCHAMBRES, taught me that if you want to change something for the better you should not expect others to do it for you. If you care about society, you must be an active member of society at any level you can and contribute to its progress. For this reason, throughout my working life, I continue to engage institutionally, strictly following the values and goals I have set.

Today, through the National Chamber Network of Women Entrepreneurs, we aim to support in every way the 500,000 women entrepreneurs, professionals and self-employed we represent, as well as every woman who wants to make her business idea a reality, while with our wider initiatives, we want to eliminate any inequality in work and the professional arena. This year we will implement important initiatives, such as training and education programmes, while, in collaboration with the ACCI, we have extended an invitation to every woman who has an innovative business idea, to join the Start-up Incubator.

A female entrepreneur is called upon to overcome many difficulties related to the social stereotypes which hinder women’s professional and personal development. She is also called upon to face the global phenomenon of the business gender gap in financing, while simultaneously meeting all her goals in multiple areas at the same time. The greatest ‘feat’ she is asked to accomplish is to manage her work-life balance during a time when everyday life is becoming more and more demanding.

In a predominantly male field, women’s entrepreneurship is forced to accept the greatest possible support from the state and from all appropriate bodies, through the rollout of targeted initiatives and action, and the application of key measures that bridge the gender gap, dealing with inequalities. This is why EEDEGE participates as a strategic partner in the Greek Innovation Lab for Women – #GIL4WGIL4W - the important European project. In the framework of this project, we propose digital tools and new structures to encourage and support women entrepreneurs, in collaboration with the Greek state, as well as with the most important research centers and university institutions in our country and with institutions from Norway.

My vision is the modernization of the state and boosting Greek society in line with the new reality that is being shaped by the huge advancements in digital technology, but always with a solid foundation in culture. Greece must once more, I believe, give its wisdom to the whole world, basedonthevaluesandideals that brought us here. To pioneer in matters related to the green transition, the digital transformation, innovation, and in combatting any kind of inequality. I believe that it’s equally important to showcase women’s entrepreneurship as one of the most important pillars of growth in our country. This is because economies with large numbers of women entrepreneurs can withstand economic crises better and Greece has had fewer than it could have had – defences to the two major economic crises it has experienced in the last decade.

I insist on the need to establish maternity benefits for self-employed women, because, simply put, a social injustice must be fixed. It is inconceivable for a society and an economy that wants to bridge inequality not to give maternity benefits to tens of thousands of self-employed women. This particular measure will not just give breathing space to the women who fight independently professionally but will also give incentives to more women to realise their business ideas.

The consequences of the pandemic on women’s entrepreneurship have been more brutal compared to the rest of the economy, dealing a significant blow to the struggle for dealing with inequality. Women have had to take on a huge ‘burden’ of care, and in many instances, lose the balance between their professional and personal lives. It’s clear that the pandemic fueled changes that can take us many years back in terms of gender equality in the labour market.

This is why we have a duty to motivate women to engage in entrepreneurship and return to the labour market. If the right steps are taken, then the pandemic can be the starting point for faster progress in the emergence of female entrepreneurship.

I hope that better days are on their way, provided that we all together decide to leave behind the rigidity of the past and implement a sustainable development plan that will have continuity, regardless of the political leadership of the country. I believe that we have to showcase the good side of Greece, and to showcase Greece aside from as the cradle of civilisation, to also establish it as a cradle of entrepreneurship. We should not stop taking initiatives to tackle inequalities. Let Greece become an international role model in the effort to bridge the gender gap.

I always have in mind the phrase, "goods are laboured upon", as life has taught me that you cannot achieve anything without hard work. Wherever you come from, wherever you want to get to in life, hard work and devotion to what you love are the basic tools you must have. I believe that Thomas Jefferson's phrase, "The harder I work, the luckier I become," expresses me perfectly.